Global commitments to meeting the 2016 Paris Agreement require substantive input and innovation from the Tech sector.

Luckily, many forward thinking enterprises are taking the proverbial climate bull by the horns and making waves in the sustainable tech space, supporting myriad other industries in meeting their climate goals and helping move conversations about how and where companies can become more sustainable into action.

However, the scale of physical, technological and cultural change needed to stop climate degradation is huge, and adapting and building new tech is easier than changing minds and habits.

Tech, however, can be instrumental in doing both.

What is green tech?

From cloud servers powered by renewables, to the development of carbon capture technology and electric vehicles, headline advancements in machinery, supply, creation of energy, manufacturing and energy consumption have taken the headlines over the last few years – and for good reason.

The green tech revolution is (in many countries) underway, and has been for a number of years – consider this McKinsey report from 2019 that talks of tech innovations in the sustainable space (such as electric trucks, LED light efficiencies, battery storage and hydrogen and solar power), or Korea’s commitment to green investments, energy and recovery from the banking crisis back in 2008, dedicating 80% of their fiscal stimulus to green growth projects.

The industry leaders and pioneers at the top of the tech and IT industry will be instrumental in changing the world for the better, adapting existing models of industry, revamping funding models, divesting from unsustainable practice and investments and re-skilling and re-training many millions of workers in fields soon to become redundant. However, that’s only one part of the battle.

Habits are hard to break, and sacrifices, to some degree, will have to be made by consumers across the world as entire economies adjust to circular practice, non carbon-intensive travel and recycling at scale.

Tech can play a leading part in changing hearts and minds, but it does have precedence: consider the impact the smartphone has had not only on communication, but social media curation and creation, the way we date, shop, interact with brands, play games, read books, consume the news. Using this as a model for tech being able to change behaviours, it stands that tech can shift other attitudes and belief systems too. 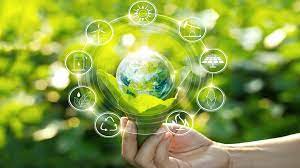 Tech can, and already is, providing the springboard for changing sustainable culture, as much as underpinning the operations to make those changes occur.

Here is how Tech is looking to save our collective futures in three important fields: data, climate and nature, and food.

Other prominent green tech innovations – such as the Smart City, adaptive carbon-proof crop creation, carbon capture at scale and space-based solar arrays will all drive change – are moving the tech industry onwards into a greener future, and together this multi-pronged approach to changing the nature of business, food and climate safety will, eventually, change minds.